Nothing says comfort like a ham and cheese slider. Up the ante with a seriously mouthwatering compound butter, soft and fluffy slider buns, and plenty of ooey gooey cheese, and you’ve got a meal that your entire family will want over and over again. Plus, they can be made in less than 30 minutes—just 15 minutes if you prep them in advance—is the cherry on top.

How to Build Hot Ham and Cheese Sliders

The components of these sliders are minimal and straightforward, but each serves a specific and delicious purpose:

The Herbed Compound Butter is Key

The herbed compound butter is what turns this dish into something exceptional, and it’s incredibly easy to throw together. All you have to do is mash together softened butter, minced shallots, chopped parsley, and mustard until it becomes a homogenous, spreadable mixture.

In my testing, I found that using room temperature butter over melted butter created a crispier, golden brown buns, whereas using melted butter made the sliders feel greasy.

Think of this recipe like a blank canvas that can be tweaked or finessed to your liking. There’s a whole world of toppings and add-ins. Here are just a couple of ideas:

All you have to do is pop the sliders into the oven and bake them until they’re hot. The assembled sliders—through step 4—will keep in the fridge, covered, for 24 hours before they’ll start to get soggy.

Bake the sliders for 3 to 4 additional minutes covered in foil when they’re cooked cold from the fridge.

In a small bowl, combine the butter, mustard, shallots, parsley, salt, and black pepper with a fork. Reserve until ready to assemble.

Using a serrated knife, cut the slider buns through the middle into two halves, dividing the tops and bottoms while keeping each slider bun connected.

Place the opened rolls on a sheet pan or baking dish, and evenly arrange half the Swiss cheese on the bottom bun. Top with the ham, overlapping slightly as you lay down each slice. Arrange the remaining slices of cheese on top of the ham, and close with the slider bun tops.

Use a spoon or butter knife to smear the softened compound butter all over the tops of the sliders.

Loosely cover the sliders with aluminum foil and bake for 10 minutes.

After 10 minutes, remove the foil and bake for another 5 minutes or until the tops of the sliders are crisp and golden brown.

Remove from the oven and allow to cool slightly before serving.

Tear or cut the sliders and serve warm.

Store remaining sliders in the fridge tightly covered. Leftovers will keep for up to 3 days.

Reheat each sliders in the microwave for 30 seconds—add 15 seconds for each additional slider.

To reheat in the oven, bake for 8 to 10 minutes at 350°F, or until the cheese has melted and the sliders are crisp and heated through.

Did you love the recipe? Leave us stars below! 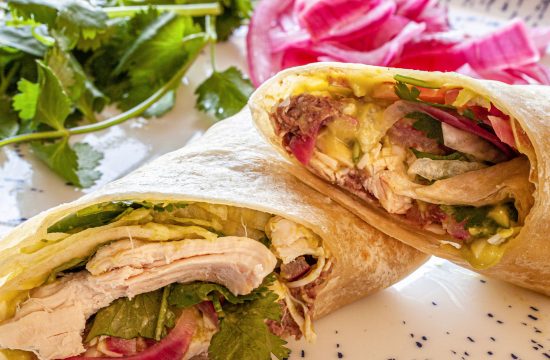 The Quintessential Summertime Cocktail: A…

Pimento Cheese Is a Southern…

Spice up Your Dinner with…

Slather Your Lamb Skewers with…

This Coconut Lime Rice Will…

The Lemon Drop Martini for…

Zucchini Carrot Bread is a…